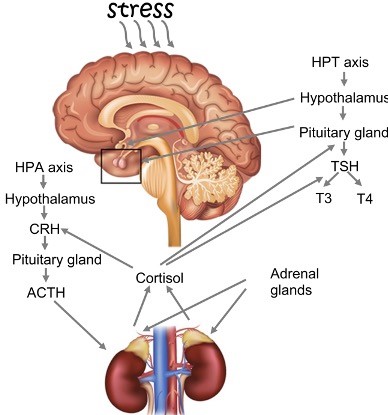 What is the endocrine system?

The endocrine system is composed of a number of glands such as the thyroid and parathyroid glands in the neck, hypothalamus, pituitary gland and pineal gland in the brain, thymus, adrenal glands, pancreas and others that produce hormones to regulate different aspects of bodily functions. These hormones are essentially chemical messengers that form feedback loops and travel via the circulatory system to regulate distant organs. Some of these functions include development and growth as well as the management of the response to stress [1].

Why it is important to practice meditation for endocrine health?

While the stress response is primarily controlled by the brain by activating the sympathetic and parasympathetic nervous systems (as explained previously), a large number of actions are taken via a combination of nerves and hormones [2]. As a result of stressors, increases in heart rate, as well as downstream release of the stress hormone cortisol, leads to the shut-down of several non-essential systems in a stressful situation that then allows for more energy to either tackle the stressor or to run away.

We must be mindful that persistent activation of the stress response disrupts the endocrine system. This means that the natural repair mechanisms will not be able to sense the need for recovery and this will eventually contribute to the onset of disease and poor wellbeing [3]. As explained in the next section, meditation can have profound effects on improving endocrine health.

How can meditation improve endocrine health?

There is evidence that meditation has a broad impact on human physiology.  For example, after meditation, changes in the brain structure and function are observed as well as lower frequency alpha and theta waves [4]. Such changes in brain waves impact the hormonal markers of stress such as lower blood cortisol levels (reduction in a primary stress hormone), lower blood pressure and heart rate – all these changes are mediated by the endocrine system [5]

Another important component of the endocrine system is the HPA axis. This axis is a part of the neuroendocrine (a network of nerves and hormones) system that regulates the stress response and other bodily processes important for mental health such as the synthesis and release of stress hormones e.g., cortisol, ACTH etc. The HPA axis is the most studied in regard to the effects of meditation. Mindfulness-based meditation can reduce the HPA induced stress hormone levels and can improve mental wellbeing [6].

In another study, among 16 individuals with clinical depression, 2 months of meditation can improve hormonal parameters [7]. In terms of a decrease in stress hormone levels (adrenaline and cortisol), the effects of meditation can be seen as early as 48 hours after beginning a meditation program [8]. Another study demonstrated that an improved response to metabolic challenges (like ingesting a high amount of glucose) can also result after a long-term meditation practice [9]. Collectively, these studies indicate that meditation can influence the HPA axis leading to decreased stress hormone levels among meditators. In addition to the HPA axis, meditation also effects other endocrine functions.

Another important endocrine axis is the renin–angiotensin–aldosterone (RAA) system that regulates blood pressure, electrolyte and fluid balance [10]. This axis has an important role in stress and is also associated with psychological well-being. In a cross-sectional study of eight college students practicing meditation for at least 2 years, blood hormone balance was found to increase during meditation compared to the state of rest [11]. This means that meditation-induced changes in the neuroendocrine system correspond to improved wellbeing.

Another important function of the endocrine system is to maintain a balance between energy intake and expenditure. The control of energy expenditure involves a complex series of mechanisms including the brain, fat tissues, insulin response, glucose metabolism and others. And importantly, meditation can improve insulin resistance [12].

Overall, the endocrine system is a very intricate and major system of the body. It produces and distributes important hormones within the body to maintain balance and health. Abundance and lack of any of these hormones can lead to an imbalance in both the mind and the body. Of course, chronic stress is a major contributor to this imbalance. As you can see from the scientific data that a regular practice of meditation can help rebalance the endocrine system. The impact of meditation is in fact beyond the endocrine system. It can also strengthen your immune system and your ability to fight infections. The next section focuses on the effects of meditation on the immune system.

I hope you found this article on The Positive impact of meditation on human physiology as fascinating as I do. My aim is that it’s provided you with valuable insights into just how powerful meditation is at holistically healing the body and mind, and reducing the risk of psychosomatic stress-related diseases.

If you would like to learn more about becoming a Transformational Meditation Teacher so you can facilitate deep holistic healing for yourself and your clients, I invite you to book a complimentary strategy call.

During the 30-minute call, I will help you create a plan and get crystal clear on how to: